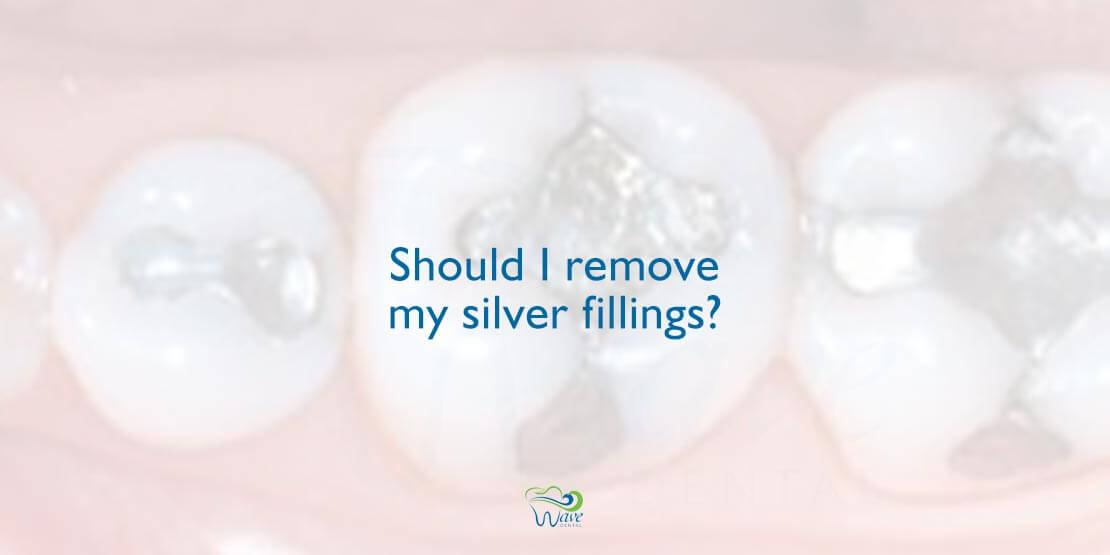 Should I Remove My Silver Fillings?

Amalgam fillings, otherwise known as silver fillings, have been used for over 100 years to restore decayed and broken teeth, but have recently become quite controversial. As with any aspect of your health, it is important to be well informed about amalgam in order to make the right decision!

So what is amalgam?

Dental amalgam is a mixture of metals, including silver, copper, tin, and mercury. Mercury is necessary to make the metal soft enough to use for a filling, but is also toxic and known to cause adverse health effects, which has lead to great concern among patients.

In the past, it was thought that, after the initial placement, the mercury in an amalgam filling became completely inert, and therefore safe. But recent studies have shown that very small amounts of mercury vapor are released when chewing. But like any toxic substance, we are exposed to mercury all the time via food, air, and water, and the real question is whether the amount released by an amalgam filling is high enough to cause adverse effects. The FDA has determined that this amount is not enough to cause harm to the general population, and has deemed amalgam fillings to be safe for individuals over the age of 6. However, a significant amount of mercury vapor and powder is released upon initial placement and removal of amalgam fillings, so precautions should be taken. For example, it is not recommended for women to have amalgam fillings placed or removed during pregnancy.

What other options do I have?

Most patients no longer want to have metal fillings placed in their teeth, for cosmetic reasons as well as concerns about mercury. Composite resin is a plastic-like, tooth colored material that is most commonly used for ordinary fillings. Although mercury-free and more esthetic than amalgam, composite resin is not quite as strong and may not be indicated for larger fillings. Also, many patients do not realize that most composite resins contain a small amount of BPA, a potentially carcinogenic material, so it is not entirely consistent to choose composite over amalgam out of fear of toxic materials. (All the more reason to practice preventive care and keep your teeth cavity-free!) Some newer composites do not contain BPA, so if this is a concern for you, speak with your dentist about the type of composite they use. Finally, composite resin requires very dry conditions in order to bond properly to the tooth, so some cases are not very suitable for composite resin. Here at Wave Dental, we strive to use the best materials possible, and our composite is a newer, hybrid ceramic-like material that is BPA free and more resilient than traditional composite resins.

In addition to composite resin, ceramic or gold inlays and onlays may be indicated in some cases. Keep an eye out for a future blog post discussing all the possible restorative materials! 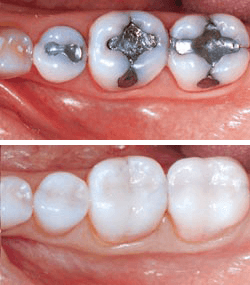 Before and after replacing amalgam fillings with composite.

It’s understandable to want to be on the safe side and avoid mercury, but that doesn’t mean that you should rush to your dentist and have your amalgam fillings removed. In fact, significant amounts of mercury vapor are released upon destruction and removal of an amalgam filling, so you would actually be increasing your mercury exposure by having them replaced! Amalgam fillings should only be replaced if they are broken or have developed recurrent decay. Be wary of dentists who try to convince you to replace all of your metal fillings for health reasons, as this is unnecessary and counterproductive.

But what if I’m allergic?

Some people have sensitivities to metal in general, but an actual allergy to the mercury in amalgam is extremely rare, and there have been less than 100 cases ever reported. If you know that you are allergic to certain metals, you should discuss this with your dentist and consider other filling materials.

Thank you for reading! If you have any more questions about amalgam, feel free to email me or check out the FDA website here for information: http://www.fda.gov/MedicalDevices/ProductsandMedicalProcedures/DentalProducts/DentalAmalgam/ucm171094.htm